Medical alert dogs: shouldn't they be on the TGA register?

The dogs are praised worldwide for their ability to support patients, but are they worth their $40,000 price tag?
By Lydia Hales

Chloe is no ordinary dog; she’s a $40,000 therapeutic device with an alleged capacity to save lives. At least she is to her owner, Sam, a young man diagnosed with myoclonic juvenile epilepsy, who uses her as his seizure alert dog. A Dogs for Life trainer relaxes with 'Spot'.

As his family told the ABC earlier this year, Chloe raising the alarm for impending seizures — once in the shower and once as he was about to cross the road — has made her “priceless”.

And  it doesn’t take long with a Google search to find the stories around the globe extolling the wonders of dogs warning patients with diabetes of looming hypoglycaemia or identifying those with undiagnosed cancer or dementia.

Organisations around the world offer assistance dogs for a range of medical conditions.

In Australia, the main provider seems to be Dogs for Life. Previously known as the Centre of Service and Therapy Dogs Australia, the original centre opened in Israel in 1994. Its first dog, for a patient with autism, was placed in this country in 2010.

Current CEO Kevin Picker says the company has since trained more than 50 dogs for medical alerts, including epilepsy, narcolepsy and hypoglycaemia.

“Uncontrolled seizures must be one of the most debilitating challenges people have,” he says.

“One of our clients, a young man, is able to walk around the block by himself, and his mother knows that he will alert her prior to the seizure so she can come with the medical kit if required.

“We have another who finished her PhD in astrophysics, got married and had two children; these are massive things for someone with uncontrolled seizures.”

But what of the cost? $40,000 is a considerable sum. Mr Picker says this is cheap since the training process is extensive, taking between 2.5 and three years.

Mr Picker says patients fill in an application and undergo an in-person assessment to see if a dog would be appropriate.

“We use several lines of dogs. Currently, we mainly use schnauzers, labradors and poodles.

“First, we socialise the puppy, making sure nothing is going to frighten it and it can concentrate on its job.

“That involves one of our trainers taking the puppy out probably for several hours per day to various locations.”

Once the dog is mature enough, they expose it to simulated seizures and encourage it to use all senses to examine people.

“Then we expose the dog to the client and see what it picks up on and start training it more specifically for that. Once the dog knows what a seizure is, we start working with the dog so it reacts earlier before the seizure takes place.”

Dogs for Life teaches the dogs to lick or nuzzle the patient if they detect something is wrong, Mr Picker says.

“That may not be a seizure, but ... once the dog becomes certain this is a seizure, it becomes insistent that the person gets down to the floor. If the person doesn’t do that, the dogs get very upset.

“So now the person has a seizure, and the dog watches and usually will bark to see if they can break that cluster.”

The dog may also be trained to alert the patients’ carers during seizures, for example, by pushing a button.

Certainly the president of the Epilepsy Society of Australia, Professor Terence O’Brien, believes some form of seizure prediction is urgently needed. Current medications do not control seizures for around 30% of people with epilepsy.

“There are many groups doing research in this area, and it is driven out of desperation of people with epilepsy,” Professor O’Brien says.

As a result, developing tools to either forecast periods of increased risk or predict imminent seizures has been the focus of teams around the world for decades, but despite the profits on offer, reliable implantable or wearable devices are not yet available.

But then, there is also a dearth of clinical studies showing that dogs can accurately predict seizures. 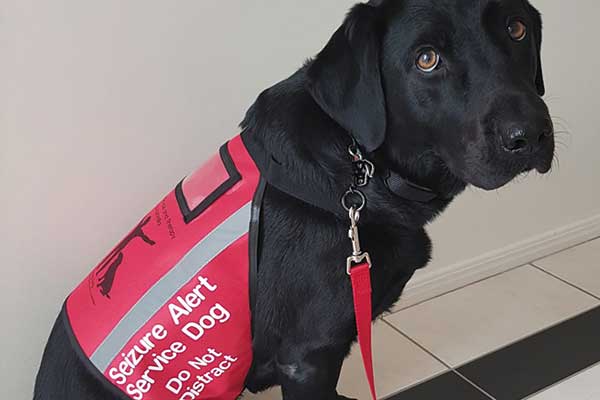 Mr Picker admits “no one really knows” how the dogs work, but he adds: “It does work; it’s been working for the last 25 years for us.

“Smelling the owner, tasting the owner, we think that is one of the big ones, listening for different breathing sounds, that type of thing ... Right from the beginning we’re training the dog to be with the person and examining them with all their senses.

“We’re in touch with some neurosurgeons in America and they tell us we’re wasting our time completely with the senses. They’re saying it’s something electrical that the dog’s picking up on.”

Epilepsy Action Australia says there are no clinical studies to indicate that dogs can be trained to predict seizure activity, although it says some families have reported altered behaviours in their pet dog prior to the person with epilepsy experiencing seizure activity.

One study published earlier this year in Scientific Reports attracted headlines. It was called ‘Dogs demonstrate the existence of an epileptic seizure odour in humans’ and involved US researchers taking breath and sweat samples from five human participants while they experienced seizures, exercised or rested.

The five trained dogs were then required to pick the canister containing the seizure samples from seven cannisters.

For each dog, the trials were repeated five times for the odours from one patient.

Then, after a two-hour break, each dog was randomly presented the four remaining sets of scents from different patients, meaning each dog was involved in nine trials in total.

And could they predict an impending seizure?

The study authors said their experiment could not show that what the dogs had detected had been present before the seizure took place.

Professor O’Brien, who is also the director of neurology at Alfred Health, Victoria, says: “Dogs are very sensitive to our non-verbal cues, so it’s not beyond the realms of possibility that they could pick up on something that would warn of an impending seizure.

“Often, husbands and wives of patients who suffer seizures say they can notice changes in their partner before one occurs. These are specific to a person — so some people may talk less, it’s just a change in their normal behaviour.”

He stresses that, on a scale of harm from “evidence-free treatments”, detection dogs are not one of the worrying things he has read about in the press.

“I can certainly think of other claims that make me more concerned for patients,” Professor O’Brien adds.

He is aware of several patients who say they have benefited from a dog, but he has only one patient he knows of who has bought a dog for seizure prediction.

His biggest concern would be if someone relied on the dog too much — for example, if they sat it in the front seat of their car to warn of an impending seizure while driving.

But then, as it does with all medical interventions, the issue of seizure dogs may also come down to the blunt issue of cost.

For instance, the ABC reported in July the story of four-year-old Ester, who experiences frequent nocturnal seizures caused by focal cortical dysplasia during which she sometimes stops breathing.

Her parents slept with Ester to ensure she was okay, but reportedly got little sleep themselves. As a response, the local community raised $30,000 to buy Ester her own seizure-alert dog.

But if dogs are being sold as providing therapeutic benefit and to monitor functions of the body, is it okay to demand they be registered with the TGA as a medical device with evidence of safety and efficacy?

But he adds: “I think the issue is always going to be the cost. I’m not sure that $30,000 is a good investment. It’s not like a dog for someone who is blind, for example. And you may be just as well to get a dog from the pound.”